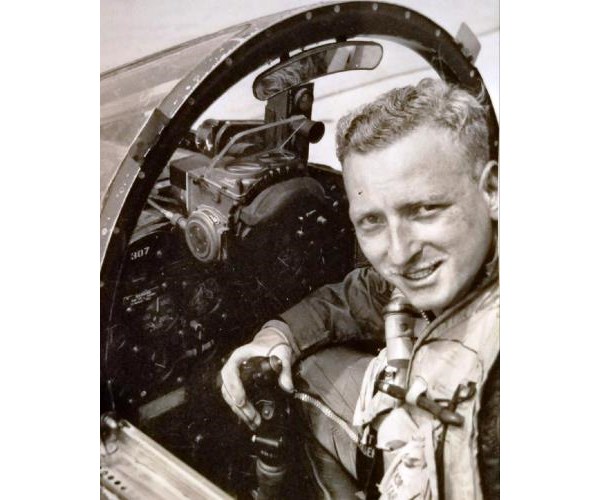 Captain Realie was the squadron’s operations officer (third in command) until the squadron was activated for the Korean conflict on March 1, 1951.

Captain Realie’s mission in combat was Air Officer for the 1st Marine Division. He was the Close Air Support Coordinator and led air strike missions on the front lines in support of ground forces, including the South Korean Marines, Army and troops. Captain Realie completed 126 missions. In May 1952, Captain Realie was posted to the US Air Force’s Staff Service in Itami, Japan, as the Base Flight Clearance Officer.

Major Realie was relieved of his duties in Japan and reassigned to Naval Air Station Glenview, reporting to the Commander Marine Air Training Command as the Headquarters Squadron Commander. Subsequently, he was transferred to VNF 543 with subsequent assignments to staff positions.

Captain Realie received 6 Air Medals, the US Navy Commendation Medal with “V” for bravery and the Distinguished Flying Cross. He served 13 months in Korea and Japan. Colonel Realie retired in 1982. Colonel Realie has over 4,000 hours and has flown 21 different military planes, from biplanes to jets. Colonel Realie was a proud member of the Glenview American Legion Joseph M. Sesterhenn, ext. 166 and was named Glenview Citizen of the Year.

Visitations will be held on Wednesday, December 22, 2021 from 4 p.m. to 8 p.m. at the NH Scott & Hanekamp Funeral Home, 1240 Waukegan Road, Glenview. The funeral will be on Thursday, December 23 at 10 a.m. at Our Lady of Perpetual Help Church, 1775 Grove St., Glenview. Interment with Military Honors will be held on Friday, December 24 at 10 am at the Abraham Lincoln National Cemetery, 20953 W. Hoff Road, Elwood. In lieu of flowers, memorials can be made at the Wounded Warrior Project (woundedwarriorproject.org). Funeral information 847-998-1020.