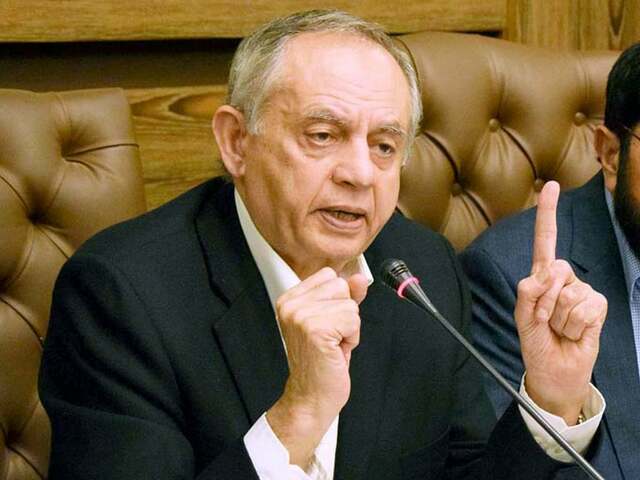 LAHORE: The Prime Minister’s trade and investment adviser Abdul Razak Dawood said on Saturday that the International Monetary Fund (IMF) is the main obstacle to reducing the sales tax.

He was answering a question during a briefing at the Lahore Chamber of Commerce and Industry. â€œThe IMF is the main obstacle to reducing the sales tax rate,â€ Razak said.

He also said that it is the IMF’s request that regulatory obligation be imposed on everything.

Abdul Razak Dawood said the State Bank of Pakistan’s Temporary Economic Refinancing Facility (TERF), which expired in March, will be reinstated for SMEs and other targeted sectors.

He said the engineering and iron and steel sectors will be the next area of â€‹â€‹focus for tariff rationalization.

He added that the government would introduce a DL-TL policy in which additional incentives would be granted on exports of non-traditional products.

The government will also sign a TIR convention with Afghanistan for the free movement of trucks to Central Asian states and other parts of this region.

The government is targeting the Central Asian region to boost domestic exports. The government will also implement the Look Africa Policy and, in this regard, an official delegation will visit Nigeria next month.

He was of the opinion that Pakistan’s export diversification has improved significantly over the past three years, which is the only way to increase exports.

â€œRegarding the SPG-Plus status and basmati rice, things are well under control,â€ he said and added that although there are challenges, they are much less severe than those of the last three years.

He said the cost of importing has increased due to inflation internationally. Oil imports have increased in value. He said the Lahore Chamber will be represented on the Board of the Export Development Fund.

Speaking on the occasion, FPCCI Chairman Nasir Hayat Magoo said the State Bank of Pakistan should control the exchange rate, which affects businesses.

On this occasion, the former president of the FPCCI Mian Anjum Nisar drew the attention of the Prime Minister’s adviser to the long delay in the movement of goods at the Pakistan-Afghanistan border. He said there are long queues of trucks which hamper trade between the two countries. He also called for a reduction in transport costs for Pakistan-Afghan trade.

While briefing Prime Minister’s Trade and Investment Advisor Abdul Razak Dawood, LCCI President Mian Nauman Kabir said the Lahore Chamber has always advocated the effective use of the exports (FED) in consultation with the main players in the economy. .

This recent increase in the trade deficit has contributed significantly to the devaluation of the rupee. In the short term, we urge the government to immediately implement a currency exchange with China from where our imports are around US $ 13 billion, he said.

Mian Nauman Kabir said that to reduce the trade deficit, tariffs and regulatory duties on luxury and non-essential items should be increased so that we can manage our import bill. It is worth mentioning that our imports in the first quarter of this fiscal year exceeded $ 18 billion.

He said Pakistan’s export products are highly concentrated in a few product lines as textiles, rice and leather account for nearly 70% of our exports. There is a need to diversify our exports, especially focusing on potential sectors such as pharmaceuticals, mechanical industry and halal food, etc.

He recommended that these potential export sectors of the economy be completely zero-rated so that their export competitiveness can be increased.

The president of LCCI said that there is a need for collective actions to explore new export markets, as around 65% of Pakistan’s exports go to just 10 countries. To increase our exports to untapped potential markets like Africa, Russia and Central Asia etc., formal banking channels should be established as a matter of priority. This issue has been raised before with state banks and the Ministry of Commerce.

â€œWe appreciate the government for having reduced tariffs on many lines of raw materials over the past two years,â€ said Mian Nauman Kabir and added: We recommend that the process of tariff rationalization continues and that tariffs continue. Importation (customs duties and regulatory fees) raw materials not produced locally should be reduced.

The LCCI president said the State Bank’s temporary economic refinancing facility, which expired this year in March, will be relaunched again for targeted sectors. This program was really good for setting up new industrial units because concessional refinancing was provided.

He said access to finance for SMEs remains a persistent challenge. SMEs get only 6% of private sector credit in Pakistan while the number of SME borrowers is only 180,000. In this context, the government should develop a concrete strategy in collaboration with private banks.

The president of LCCI said that the 17% sales tax rate on inputs of various export-oriented industries is extremely high and needs to be lowered because it takes a long time for companies to get their refunds.

Mian Nauman Kabir said the local tax and levy (DL / TL) duty drawback facility for exporters will not be reduced but will be further strengthened in value-added sectors.

LCCI Senior Vice President Mian Rehman Aziz Chan and Vice President Haris Ateeq said there was a need to ensure that electricity tariffs for export-oriented industries remain competitive, as any tariff increase leads to a considerable increase in the cost of doing business. Continuous availability of gas (24/7), especially for export-oriented industries in winter, should be ensured, they said.

Out with professionalism and expertise, with the right wing ideologues