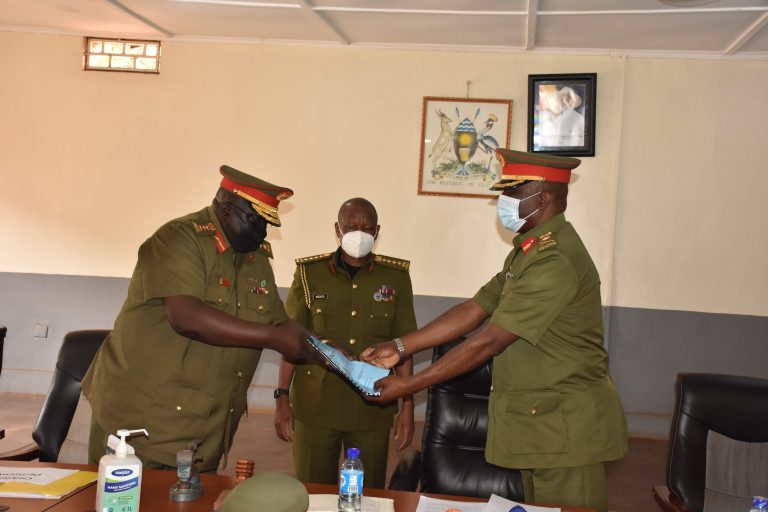 The function was chaired by the Chief of the Defense Forces, General Wilson Mbadi.

He called on Brigadier General Mugabe to continue to use Lt. Gen. Andrew Gutti as a consultant in carrying out his duties.

General Mbadi noted that the new president should always consult with senior UPDF leaders and also work with his team in order to accomplish the tasks at hand.

The CDF noted that it recognizes the real effectiveness of the judicial authority which lies in the respect and acceptance that the public gives to the UPDF in the exercise of the judicial function, the order to strengthen the State rights to protect human rights and freedoms to build and maintain public confidence in the military justice system.

He welcomed that Article 126 [2] of the Ugandan Constitution mandates the UPDF to try different categories of cases without discrimination and to deliver justice expeditiously and determine adequate remedies for victims.

The CDF stressed that the General Court Martial plays an important role in establishing discipline among the forces as well as among civilians.

The General Court Martial is created by the UPDF Act under Section 197 with and can sit anywhere in Uganda and even outside Uganda wherever the UPDF is deployed, the CDF said.

Citing the biblical book of 2 Corinthians 8:20-21, he implored everyone to perform their duties diligently in accordance with the mandate of the UPDF and to refrain from acts that lead to public distrust of the institution. of the UPDF.

The new president, Brigadier General Mugabe, thanked the UPDF for giving him another assignment to serve in one of the key posts in the forces.

He also promised to work hand in hand with the former president and his team in order to accomplish the assigned tasks.

Others who witnessed the handover and pick-up did; the Joint Chiefs of Staff, Major General Leopold Kyanda, Chief of Personnel and Administration, Major General George Igumba, Air Force Chief of Staff, General of Brigade David Gonyi, Defense Spokesman Brigadier General Felix Kulayigye, Colonel Namanya the Deputy Commander of the Military Police and as well as members of the tribunal and technical staff.