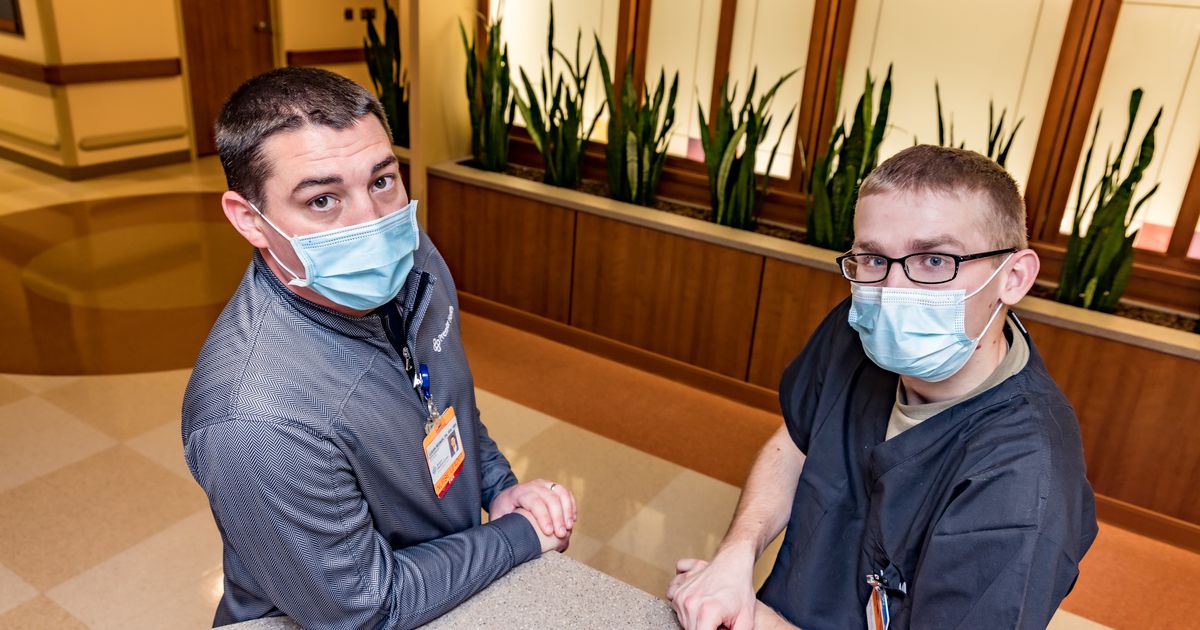 Guard members have been deployed to hospitals across Ohio to help fill staffing shortages as workers quit, demand rises and infections spread in the latest COVID-19 surge.

It was then that Hudnall and his unit’s guard members were assigned to the Atrium Medical Center.

The same hospital where his brother-in-law works.

They learned of the coincidence after texting.

“It’s great to have him with others around,” said Beeman, 34, a 2006 graduate of Edgewood High School. “You can hear the sounds and see the tears of the staff. We are exhausted. It is very necessary.

Dr. Keith Bricking, president of AMC, said there are several non-clinical functions that are “vital to day-to-day care and service” at the hospital. Guard members will be on site during the first and second shifts, seven days a week, officials said.

“The assistance of the Ohio National Guard in these tasks means we are able to more efficiently free up beds for the next patient,” he said.

Beeman also enjoys seeing members of the guard, some wearing military fatigues, helping out throughout the hospital.

“It’s definitely something different,” he said. “Makes you feel, I don’t know, patriotic.”

Hudnall, 22, lived with his sister, Nikki, and her family for four years while attending and graduating from Edgewood High School in 2018. He became more of a big brother than an uncle to the kids Beeman: Logan, 11, Lydia, 7, and Lili, 4.

After graduating, Hudnall moved to Kentucky to work for her father’s construction company.

Beeman said it was reassuring to have his brother-in-law and other members of the guard to help with non-clinical duties at the hospital. He said Atrium staff, like everyone working in the medical profession, is physically and mentally exhausted due to the number of COVID-19 patients and the special restrictions.

He works on a medical/surgical floor and all 48 beds are full. Eighteen of the patients, or 38%, are positive for COVID-19. All patient room doors are closed to provide another layer of protection against the spread of COVID-19.

“I hope we never have to go through this again,” Beeman said, echoing everyone’s sentiments.

Then he offered a ray of hope: “There is a light at the end of the tunnel.

When Beeman was younger, he followed his mother when she worked as a social worker at a nursing facility in Middletown. It was there that he learned the importance of “helping people” and why he became a nurse, he says.

Now he is learning the importance of receiving help from others.