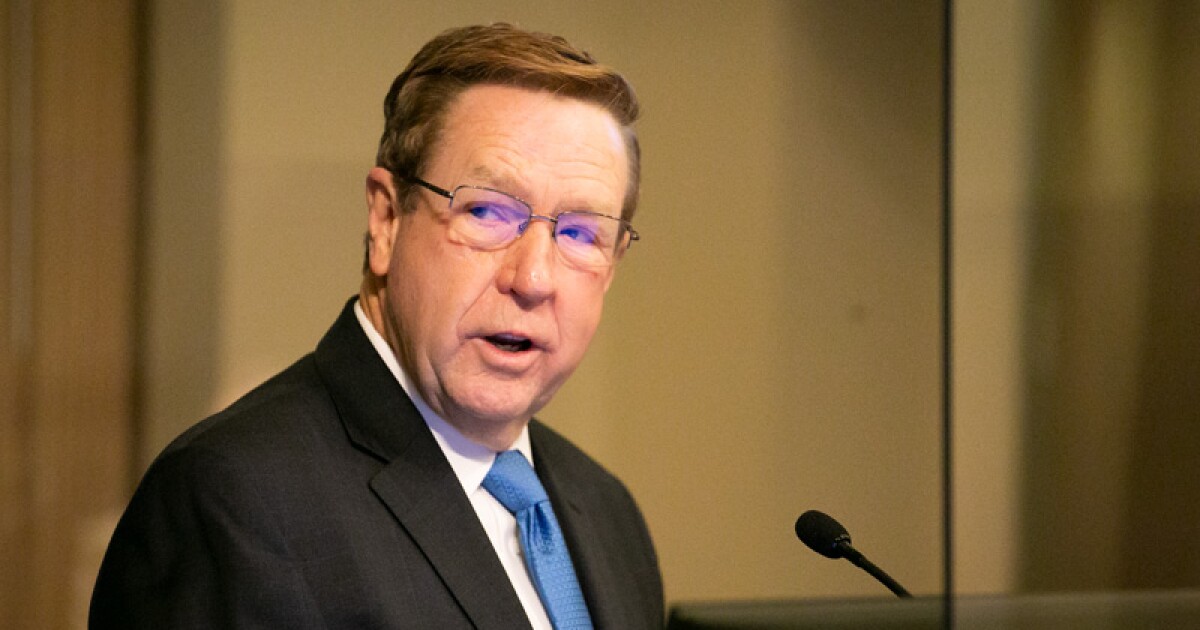 Johnson County’s top lawyer raised concerns the sheriff was trying to interfere with the election | KCUR 89.3

Johnson County Sheriff Calvin Hayden questioned county election officials in a private meeting earlier this month about why ballot boxes were available at public libraries during the 2020 election, and asked if ballot boxes would be eliminated in the next election.

At that meeting, held on July 5, a Hayden staffer also requested that sheriff’s deputies be present at the Johnson County election office when counting ballots in the upcoming election.

And Hayden has offered to have his staff drive around in unmarked vehicles to pick up ballots from ballot boxes.

These are among some of the demands made by Hayden during the July 5 meeting with the Johnson County election office, according to a memo written two days later by Johnson County chief legal counsel Peg Trent.

“As we have discussed, my concern is that these requests create the appearance that the sheriff’s office is attempting to interfere with an election and direct a duly authorized election official as to how an election will be conducted,” Trent wrote. to Hayden after summarizing the July 5 meeting, during which Hayden challenged the integrity of the Johnson County election and requested law enforcement involvement in the election proceedings.

The letter was obtained by KCUR through a Kansas Open Records Act request.

Trent’s memo surfaced as Hayden, a Republican, steps up his rhetoric on a criminal investigation into unspecified allegations of voter fraud in Johnson County in the 2020 election. And it comes as other government officials and right-wing politicians continue to insist, without evidence, that fraud delivered President Joe Biden his presidency over Donald Trump.

Since then, Republican-controlled states have passed legislation to limit voter access to the polls despite a lack of compelling evidence of wrongdoing in the 2020 election.

Hayden visited a rally in Las Vegas last week of the Constitutional Peace Officers Association, a group that believes sheriffs have more authority than anyone at any level of government in their own counties. There, Hayden told the group that his investigation into voter fraud was continuing, even though he presented no evidence pointing to impropriety.

Hayden noted that President Donald Trump failed to win Johnson County in 2020, according to a July 13 article in the Kansas City Star which described Hayden’s remarks during a panel in Las Vegas titled “2000 Mules: Law Enforcement Has To Step In At This Point. Will Sheriffs Investigate?”

Hayden, whose office did not respond to a request for comment on his election investigation or Trent’s characterization of the July 5 meeting, cited the rise in voters registering as Democrats in Johnson County as a cause of his suspicion of county elections, according to a Shawnee Mission Post article Last week.

The Johnson County Sheriff’s Office justified its refusal to provide documents requested by the Shawnee Mission Post regarding the sheriff’s investigation into election matters by claiming that the documents implicated an ongoing criminal investigation.

KCUR submitted its KORA request — which sought, among other things, all documents relating to the July 5 meeting — to the Johnson County Elections Office.

Through a spokesman, Fred Sherman, Johnson County Elections Commissioner, and other county officials present at the meeting declined to comment on this story, except to say that Trent’s letter told precisely the July 5 meeting. Sherman defended the merits of the elections under his supervision.

And Kansas Secretary of State Scott Schwab, a Republican, said no evidence existed to support the idea that the fraud affected the results of the 2020 election.

Present with Hayden at the July 5 meeting were Sherman, Johnson County Assistant Election Commissioner Josh King and Deputy County Executive Joe Waters along with several deputies and staff from the sheriff’s office, according to Trent’s letter. .

“As noted in our phone conversation, the role of the sheriff’s office in overseeing the security of county buildings, including the election building, is different from overseeing election operational procedures,” Trent said.

Trent’s letter, which also summarized a phone conversation she had with Hayden after the July 5 meeting, said she understood the meeting was called to “discuss ballot box security cameras.”

“During this meeting, you questioned county staff about the previous election, challenged the integrity of the Johnson County election, and requested that local law enforcement participate in ongoing election proceedings,” said Trent.

“You (Hayden) clarified that you were seeking information to prosecute certain election crimes that may occur,” Trent wrote. “I acknowledge your authority to investigate a crime report. We will continue to work with your office on any potential crime that comes to our knowledge.

Trent’s letter pointed out that state and federal laws govern elections, with Kansas law designating the secretary of state as chief electoral officer. In Kansas, sheriffs have the authority to investigate election-related misconduct, such as disturbing the peace at polling places, obstructing people approaching polling places, and soliciting contributions within 250 feet of a polling station.

“Procedures and duties are defined and we cannot and will not allow breach of duty or law,” Trent wrote. “From our telephone conversation, you acknowledged that the roles and responsibilities assigned to your elected office, including the prosecution of election crimes. The county, in turn, through the commissioner of elections, will carry out the roles and responsibilities assigned to it and continue to organize fair and impartial elections for the citizens of the county.