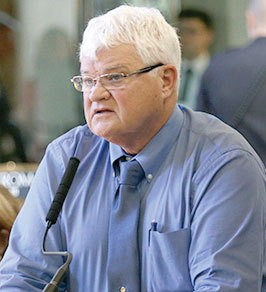 A closer look at the investigation into the photographs of a former senator Mike Groene’s legislative aide shows that there were more fallout than explosives in his wrongdoings.

The inquest concluded that Groene had done nothing illegal, but called his behavior rude and bizarre.

Lincoln labor attorney Tara Paulson led the investigation under the direction of the legislature’s executive committee.

As previously reported, Groene staff member Kristina Konecko discovered the photos on her laptop while on duty. One of his tasks was to clean Groene’s computer.

Konecko found the photos at different times, starting in January and for a few weeks. The investigation report doesn’t say how many photos were found, but it was enough for Konecko to file a workplace harassment complaint in early February.

There was talk of an informal settlement, but that didn’t happen.

Groene’s term in the legislature was in its final months. According to the report, as the aide considered the informal resolution, he filed on Feb. 15 to run for a seat on the University of Nebraska Regents, NU’s board of trustees.

That filing upset the aide, who felt Groene was not taking the informal resolution process seriously enough, according to the report. Thus, the informal settlement was rejected and the matter was formally investigated in its own right.

It was the end of politics for Groene. Rather than withstand public controversy, he resigned from the legislature on February 21. He also gave up the candidacy for a seat of regent.

He said he was quitting politics altogether. He told the Newsletter he wasn’t even going to read the news anymore.

The resignation created an upheaval in local politics. Governor Pete Ricketts quickly asked five potential replacements to come to Lincoln for interviews. Three of them were candidates who had previously applied for the seat. One of the other interviewees was Mike Jacobson, who was appointed to the position a few days later.

The assistant had worked for Groene on and off since 2015. She said Groene never made her feel uncomfortable until she found the photos in late January and early February. She said she was shocked to find them.

Groene apparently took the photos with his cell phone without his knowledge, then saved them to his computer and transferred them to more personal folders. Despite suspicions to the contrary, investigators have found no evidence the photos were ever shared with anyone else.

When the assistant discovered them, she simmered for a while. Then she contacted the Legislative Affirmative Action Officer on February 4. The executive committee of the legislature – the committee responsible for these matters – was quickly informed.

The Executive Committee’s legal advisor came to Groene’s office to look at the photos on the laptop. Groene was absent from the office; he was not at work that day.

On February 7, as mutually agreed, the assistant did not come to work. She did not return until February 25.

On February 9, Executive Committee Chairman Dan Hughes and Speaker of the Legislative Assembly Mike Hilgers met with Groene to discuss the complaint. Groene allowed the legislature’s IT staff to search his phone and laptops.

The following day, Hughes and the executive committee’s legal counsel proposed an informal resolution to both parties, in accordance with the aide’s desired handling of the matter. One of the stipulations was that Groene would delete all photos.

On February 11, the IT department searched Groene’s phone and laptops. The report doesn’t specify what, if anything, they found, but another section of the report says Groene quickly deleted the photos.

By then, the aide had told friends and family about the photos, and word began circulating in the capital building. On February 15, the Nebraska Sunrise News, an online newspaper, contacted help and asked about it. She told the reporter what had happened.

On February 18, Groene responded publicly, saying he was resigning. He told the Newsletter that he would give up politics altogether, and that the best way for him to do that would be to quit “cold turkey”. He gave the Legislative Assembly his formal notice of resignation the following business day, February 21.

Some of the photos, or the computer file folders containing the photos, were named on Groene’s computer. Many of the names are a hodgepodge of letters – apparently Groene’s creations. Only a few are recognizable, including Camel, Pageboy, Blonde, Legs and Rear Tight, according to the report. Unrecognizable names include “Inmd pic” and “Inmdsm”.

Later, after the investigation was completed and the report was released, veteran Legislature reporter Fred Knapp of Nebraska Public Media (formerly Nebraska Public Radio) asked Groene about the “tight back” name.

Groene replied that the name indicated that the pants were too tight.

As part of the investigation, 10 people likely to be aware of the situation were interviewed. None of them knew about the photos until news of the complaint started making the rounds in the legislature.

Witnesses said Groene treated everyone the same in the office, although he could be rude. They said the relationship between Groene and the assistant was more like a father than a daughter.

As word of the complaint began to spread, Groene told a few nearby workers that he had made a mistake taking the photos and wanted the complaint to go away. He said he had already cleaned them from his cell phone and laptops.

Paulson found that Groene did not sexually harass the aide, or create a hostile work environment based on gender.

Paulson said when the assistant found the photos, Groene pulled them down as soon as he was approached, never denying that he had taken them.

All the evidence is not there yet. The Nebraska State Patrol is running a parallel investigation and the NSP has Groene’s laptop. Paulson reserved the right to reopen his investigation once the laptop becomes available.

The report also contains recommendations for the Legislative Assembly’s policies on workplace harassment. The recommendations will be considered by senators before the next session.

• Consolidate all human resources functions into a single office that would serve senators’ employees as well as employees of the entire legislature — pages, sergeants, computer specialists and others.

• Continue regular training of all employees and senators on sexual harassment.

• Give employees paid time off if they file a workplace harassment complaint.

• Make it clear that electronic devices, including backup files, may be searched as part of an investigation.

• Clarify that the “lawful use” of electronic devices for senators and staff is the performance of legislative duties as well as narrowly defined “essential personal business”, and that senators and staff should not expect complete confidentiality of information on these devices.

Senator Anna Wishart, a member of the Legislatures Executive Committee and a former legislative staffer herself, thanked Konecko “for having the courage to speak out on this issue.”

“It is clear that we still have a lot of work to do to improve our culture and work environment in the Legislative Assembly.” Wishart said.

(This report was first published in the Newsletters April 27 print edition.)