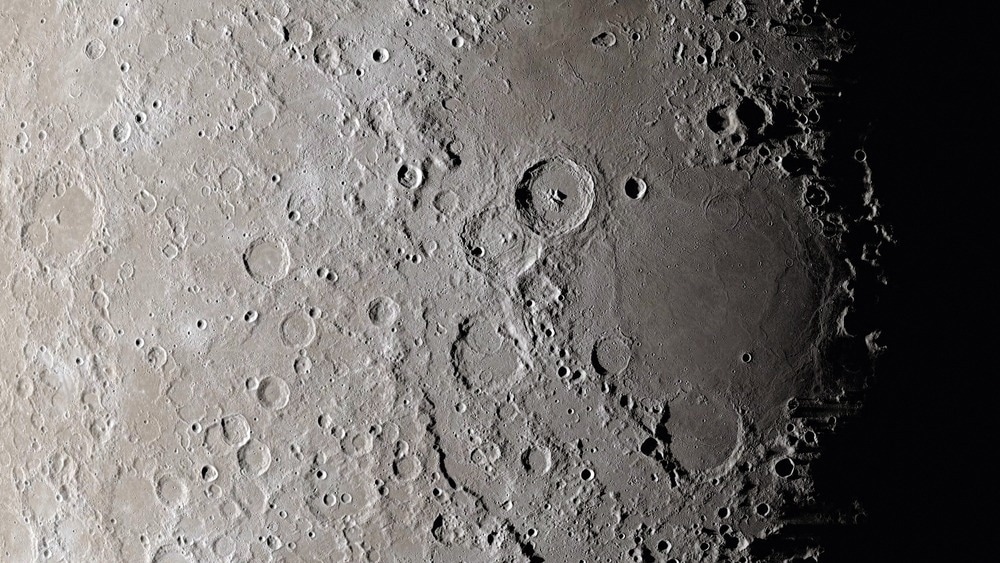 Model to improve knowledge of the surface of the Moon

A study published in the Applied Remote Sensing Journal proposed an approach to incorporate lunar spectral irradiance data to develop an improved lunar model for radiometric calibration of instruments. Calibration by the resulting model improves the sensitivity and reliability of measurement trends.

Although the Moon is Earth’s closest celestial neighbor, our understanding of its spectral irradiance is less fine than that of the Sun and other bright stars such as Vega.

Since its creation, the environment on the surface of the Moon has remained virtually unchanged. The Moon’s surface is accessible to spacecraft in Earth orbit and is an exceptionally stable diffuse reflector.

The goal of monitoring and improving understanding of the Moon’s surface has resulted in increasingly stringent radiometric accuracy requirements for spacecraft remote sensing instruments. While instruments on board spacecraft are calibrated against known standards in a laboratory, their responses in space can vary and may not be consistent over a long period of time.

The irradiance of the Moon’s surface spectrum, as perceived by spacecraft from a lunar model, is needed for calibration. The Robotic Lunar Observatory (ROLO) model, or Global Space-Based Intercalibration System (GSICS), was used in lunar calibration, which compares a lunar irradiance reported by an instrument to the actual irradiance.

However, the ROLO model has multiple drawbacks. For example, its error is estimated to be 5% or more, the libration components are constant at all wavelengths, and 328 coefficients are needed to give results at 32 irregularly spaced wavelengths, which are then convolved or interpolated to the required band.

Additionally, the ROLO model was designed to be polarization insensitive. However, satellite instruments using scanning mirrors are polarization sensitive.

Theoretically, one can calibrate using the luminance for a particular part of the Moon; however, this is difficult due to the variability of the Moon’s surface.

Data from several telescopic and spacecraft surface measurements are included in the lunar spectrum irradiance model. Calibration data was derived from 90,000 lunar images. In addition, an irradiance libration model generated from lunar orbiter measurements has reduced the number of required coefficients.

The lunar calibration coefficient for each band is derived by assigning a single scale factor to each band for multiple iterations.

Spectrometer data was averaged over 27 flat-topped synthetic bands aligned with interspaces and spacecraft bands for convenience and noise reduction.

High-resolution cylindrical maps of the Moon at different wavelengths have been obtained from spacecraft orbiting the Moon and can be used to generate the libration model. The continuous solar spectrum was measured with a high-resolution variant of the TSIS-1 hybrid solar reference spectrum.

The goal of the Lunar Spectral Irradiance Model System is to use new methodology and various data sources to develop an improved lunar spectral irradiance model in the solar reflectance range of 350 to 2400 nm.

A new methodology (SLIMED) for combining various sources of lunar spectral irradiance data has been designed and used to provide an improved lunar model for radiometric calibration of instruments.

The SLIMED model is continuous in geometric parameters and in wavelength. The proposed model solves all the drawbacks of the ROLO model as it has 1/2 of the magnitude residuals and 1/10 of the number of coefficients compared to the ROLO model.

SLIMED was created in Interactive Data Language (IDL), a programming language widely used at NASA. The SLIMED methodology, when implemented in an open language, can be used to provide a scalable reference model for the lunar calibration community. However, it could rely on precise, traceable measurements of lunar irradiance above the atmosphere.

When the SLIMED model is applied to 25 instruments and two additional models, it shows promising consistency and large discrepancies. This indicates that from 400 to 870 nm, the MODIS, PLEIADES, OLI and two surface observatories were calibrated using laboratory standards rather than stars.

Calibration of 26 instruments and two published models showed significant biases, although eight instruments agree within approximately 3% over the entire wavelength range from 400 to 840 nm.

Calibrating many instruments against a model reveals significant similarities and differences. Some ground-based instruments have fairly stable wavelength offsets. This means that something is wrong with the lunar calibration of some of the instruments, either in the processing of the radiation or in the observations.

It is necessary to study and address the reality of comparisons based on a single lunar model to achieve the full potential of lunar calibration.

Disclaimer: The views expressed herein are those of the author expressed privately and do not necessarily represent the views of AZoM.com Limited T/A AZoNetwork, the owner and operator of this website. This disclaimer forms part of the terms of use of this website.