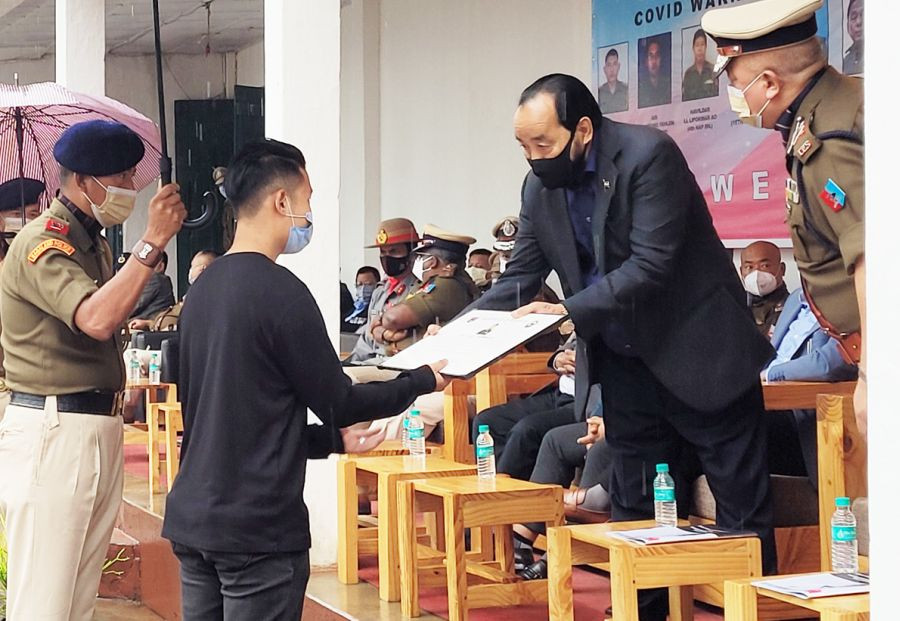 Deputy CM Y Patton graciously handing over a relative of a police member who died on active duty from COVID on Police Memorial Day at the New Phesama Police Reserve on October 21. (Photo Morung)

Our correspondent
Kohima | 21st of October

The Nagaland State Government today presented gratis Rs. 10 lakh each to the relatives of six out of 14 Nagaland Police members who died of COVID-19 in the line of duty.

It was presented by Deputy Chief Minister Y Patton during the Police Memorial Day parade at the new Phesama Police Reserve, Kohima. The Dy CM assured to give the ex-gratia to the 8 others as soon as possible.

Recognizing the contribution of police in the fight against COVID, Patton said Nagaland police, along with health workers, have been at the forefront of government efforts to control the spread of COVID-19 in Nagaland. “When the state ran out of quarantine centers following the repatriation of Nagas from mainland India, Nagaland police provided much-needed facilities and handled the same with great success,” he said. declared.

During the pandemic, he said the Nagaland police went beyond the conventional “law and order” approach and took on the role of messengers and public health service providers, performing police-centric policing. citizen.

He went on to say that the current government has always supported its police force. “It has been the prerogative of this government to guarantee the privileges and the well-being of the police officers of the State and, in this light, the government declared Ex-Gratia of Rs 10 Lakh each for each police officer and policewoman who lost their life to COVID-19 while on active duty during the pandemic. “
While maintaining that monetary relief cannot compensate for the lives lost, he added that it is an expression of gratitude on the part of the citizens.

Patton further noted the recent capture of contraband gold worth over Rs 22cr, the largest in state history, at the Khuzama interstate checkpoint. “Their exemplary sincerity, honesty and dedication in the performance of their duties is commendable and deserves full praise,” he said, adding that the government was working to reward staff.

On Police Day of Remembrance, Patton called on all police officers to emulate the ideals of “our fallen heroes to ensure peace, tranquility and progress in our society and also urged all Nagaland Police personnel to continue to uphold their motto of ‘Safety, Service and Sacrifice.

DGP T John Longkumer, while paying tribute to the staff, said the ex-police gratia will be remembered. He said, â€œThey not only maintained law and order, enforced COVID SOPs, maintained supply chains for essential commodities and medicines, but also made community-oriented policing (COPS). a reality in Nagaland. â€

“Let us renew our commitment to serve our people, to guarantee and maintain the integrity of our nation and to make the sacrifice if necessary,” he added.