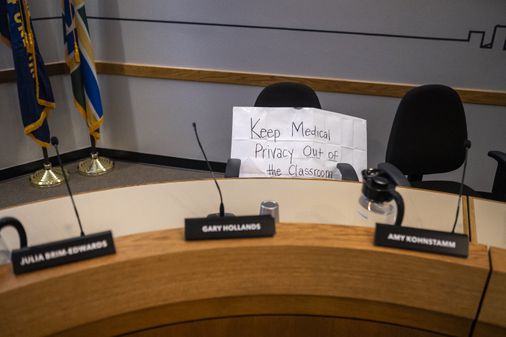 Out with professionalism and expertise, with the right wing ideologues

“While the lived vitriol was irritating, when threats were left on our doorstep it was much more concerning,” Nick Baldetti told ABC News after resigning in July from his post as director of health services in the Reno County, Kansas. “It’s one thing to be threatened, but when those threats spill over into your family, it’s a whole other stress.”

Public health officials aren’t the only ones to experience vitriol and worse for just trying to do their job. This growing list includes election officials, teachers, administrators and school board members forced to find themselves in the eye of a right-wing storm that has been unleashed mostly unchecked for years.

With many people moving away from fear and frustration, the endgame is taking shape – to replace them with people obsessed with toxic ideologies instead of serving the public good.

When Merrick Garland was confirmed in March as head of the Department of Justice, it’s a safe bet he never imagined his duties as attorney general would include protecting school board members. But months of meetings that turned into screaming matches, attended by mostly white parents angry with everything from mask warrants to school programs, forced Garland’s hand.

On October 4, the Justice Department released a memo citing “a worrying increase in harassment, intimidation and threats of violence against school administrators, board members, teachers and staff who participate to the vital work of managing public schools in our country â€.

Garland said that though “a heated debate. . . is protected by our Constitution, this protection does not extend to threats of violence or efforts to intimidate individuals based on their views. The Justice Department, he said, would use “its authority and resources to deter these threats, identify them when they occur, and prosecute them where appropriate. For that, Garland spent hours in a Senate hearing on Wednesday as Republicans lied about the contents of the memo, took pride in the grassroots, and downplayed actual threats against school board members.

What this dishonest demagoguery evoked was the reaction Janet Napolitano, the Obama administration’s first homeland security secretary, faced when she released a joint report with the FBI in 2009 on an upsurge. far-right extremism, radicalization and attempts by national terrorist groups to recruit Iraq. and Afghan war veterans. The Tory reaction was so fierce and, of course, intentionally misleading that Napolitano backed down and offered “his sincere apologies for any breach.”

It’s the same fate Republicans want for Garland’s memo. They don’t want Americans to remember that some local professionals and citizens who once quietly performed their assigned duties are now harassed by strangers or have to ask the police to monitor their homes and families. Someone even claimed in a bogus call to state child protection services that a Florida school board member was abusing their child. His real offense? Support masks in schools.

This woman remains in the school board of her riding. The question arises as to who will replace her when she has had enough of a position that is tantamount to wearing a â€œkick meâ€ sign. This is also the case for election officials and workers who still face the stench of the Big Lie and various voter suppression efforts. Their posts could be filled by right-wing supporters more attached to power than to democracy.

Professionalism, expertise and dedication to public service are no longer as valued as misinformation and tribalism. This is why Donald Trump in the last months of his presidency wanted to install a loyalist to the Department of Justice who would be ready to overturn the election. His effort failed but provided a model for his supporters.

Trumpism did not create this rage, but quickened it. COVID protocols have been falsely assaulted as tyranny made it manifest. A nation pushed to heed its racist past and present has turned the dark truths of history into America’s bogeyman. All of this anger is an essential part of a long orchestrated game designed to push our faltering democracy into the abyss.