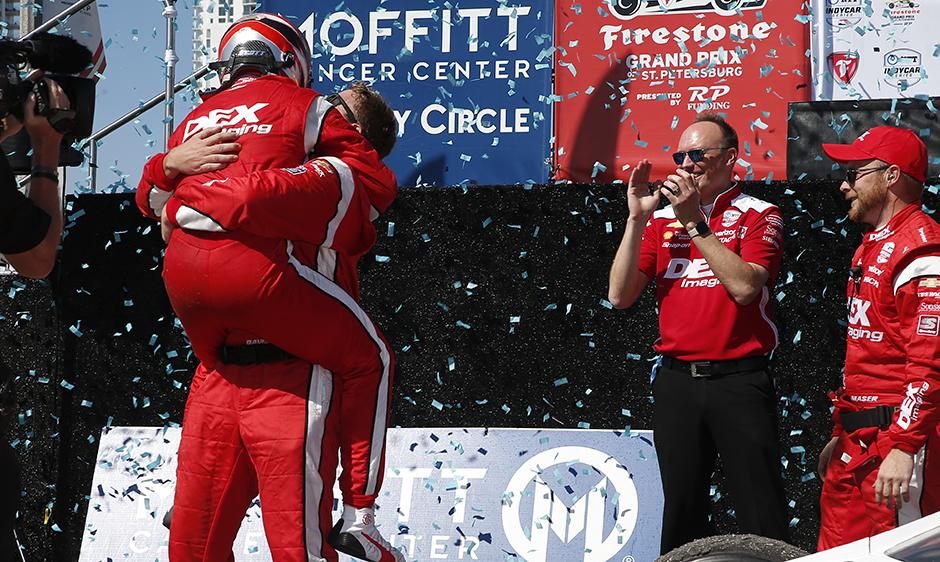 Every Veterans Day is an opportunity to honor the men and women who served in the military to protect the United States of America.

In motorsport, the close relationship shared with the military extends far beyond the pre-race festivities that include the singing of the national anthem. In fact, it’s not uncommon to find a crew member on an NTT INDYCAR SERIES team who has served.

In the case of Team Penske, Colin Davis, Blaine Hardy and John Haslett are among those who have moved from their respective service branches to racing.

Davis, a mechanic and tanker for Scott McLaughlin’s No. 3 Chevrolet Penske, joined the military in 2012 and served four years as an infantry gunner. He held the rank of specialist at the end of his term and went on to pursue a career in racing.

“I had an in-between, so basically it was all about me and two of my other best friends that I had in the military, the idea was to get out of the military and get into racing,” said Davis, an Ohio native. .

There was a “gap year” until all three were reunited in 2017 at the NASCAR Technical Institute in Mooresville, North Carolina.

“We graduated in April 2018,” Davis said. “Then I volunteered with Jennifer Jo Cobb for a little while – it’s a (NASCAR) Truck Series team – then I started helping hang bodies for Young’s Motorsports, then I joined Penske in May 2019.”

It became a dream start as Davis was assigned as a mechanic to Simon Pagenaud’s car at the time, who was part of the team that swept May with victories at the Indianapolis road course. Motor Speedway followed by the Indianapolis 500 presented by Gainbridge.

“It was pretty crazy,” Davis said. “Going from hanging bodies at Young’s Motorsports to Penske and then winning the biggest race in the world was pretty ridiculous, and I didn’t see it coming.”

Hardy, a mechanic who also handles air intake duties on the No. 12 Team Penske Chevrolet driven by Will Power, was in the Marine Corps Reserves from 2006 to 2012. Hardy was a corporal at the end of his mandate, with its main tasks of logistics handling and boarding.

Like Davis, Hardy also enrolled in the NASCAR Technical Institute after his time in the military.

“Running was involved in my childhood, something I did on Saturday nights at home,” Hardy said. “I went into the Marine Corps right out of high school thinking that was the path I wanted to go. It turned out that wasn’t exactly what I wanted to do, so I went to reserve and went to school.

“I did a couple of years of regular college, then I decided…initially, I wanted to be an engineer. I wanted to work my hands. I knew I liked that stuff. Turns out I didn’t want to sit behind a desk, and typical college wasn’t for me. So I worked in a machine shop most of my younger years. It was one of my first jobs.

“My dad worked there. He was a shop foreman, so I was very familiar with this stuff. Then I discovered NASCAR Tech (NTI), and I went there too. They actually put me in touch with Penske, and that’s how I got started. I wanted to build engines on the NASCAR side and I stepped in the door to the INDYCAR team parts room, and it went from there. I did a year and a half in the parts room and then I wanted to go on the road to make pits, so I was transferred to the truck department. I worked as a truck driver and did pit stops for a few years. And then in 2018 I decided I wanted to get involved a bit more and moved on to the mechanical side of things. I have been a mechanic since 2018.

And success came with it as Hardy took part in Power’s remarkable victory in the 2018 Indianapolis 500 presented by Gainbridge.

“I think it was Oriol Servia who was ahead of us,” Hardy said, recalling the final laps. “We came out of (lap) 4 and only had a few more laps to pass him, and he dives into the pit lane. From then on, I was like, ‘As long as nothing bad happens here, we’re going to bring this home right away.’

“It was the five worst rounds of my life; just sweating it, thinking about the preparation, making sure everything is okay, is this thing going to do those five laps and finally make it through the Yard of Bricks. It was probably my favorite victory that I can remember.

While the memories of this race won’t be forgotten anytime soon, the one that touches the heart is the pre-race ceremony, especially the game of “Taps”.

“It means a lot to me,” Hardy said. “It means a lot that we put on so many shows for the military. It makes me proud to have been part of it. I like to talk to Marines coming out, let them know I have past service. We always start a conversation with that. ‘Taps’ always gets me. I don’t care where I am or who plays it, “Taps” always catches me.

“Part of my company reserve duty was to do military funerals, and that’s something you never get used to. What this song means, what the 21-gun salute means. It’s just powerful no matter what.

Then there is John Haslett. Driver of RP1 (Roger Penske’s office bus) and mechanic, Haslett has been part of the Penske team for 42 years.

Raised on a farm in Pennsylvania, Haslett was sworn into the United States Navy on New Year’s Eve in 1976. His tenure began with a boot camp in Great Lakes, Illinois, where he endured freezing temperatures from -22 F. He became a boatswain. mate and eventually hull technician, with time spent on an “ocean tug” in North Atlantic waters off the coasts of Scotland and Wales. He finished his term in 1981 with the rank of second class petty officer.

Haslett returned home to Pennsylvania and found himself in a unique situation.

“My uncle, his store was an executive turnaround business right next to Penske Racing, the original in Newtown Square,” Haslett, 64, said. “I grew up until fifth grade in Newtown Square. Then we moved. In sixth grade, we moved to the farm. After my uncle sold the executive turnaround business, which the IROCs that Mr. Penske used to bring them and straighten the frames out there in his factory. He went and became the parts runner for Penske Racing, and they moved to Reading, Pennsylvania. And he was still residing in Newtown Square. So, from Pool, England, where the cars were built, he was going down to Philadelphia, became good friends with Customs.

“In ’81, when I got out, I left the service, and I didn’t really know if I wanted to work on the farm or what my future was. He asked me if I wanted to go during this break to Indianapolis to help set up the garages. I said, ‘Yes, of course.’ What an experience.

“So it went from there being a gopher, and I loved it. And I worked for Bobby Unser in ’81. And of course we won the race. The adrenaline rush was amazing, and it went from there. Since then, I’ve been part of the team.”

While each of the three veterans has had success in racing, they each credit the structure and discipline instilled in them by the military as core values ​​that helped each of their respective transitions.

“It’s been a dream, really,” Haslett said. “I wouldn’t change anything. It really has been a lifetime.