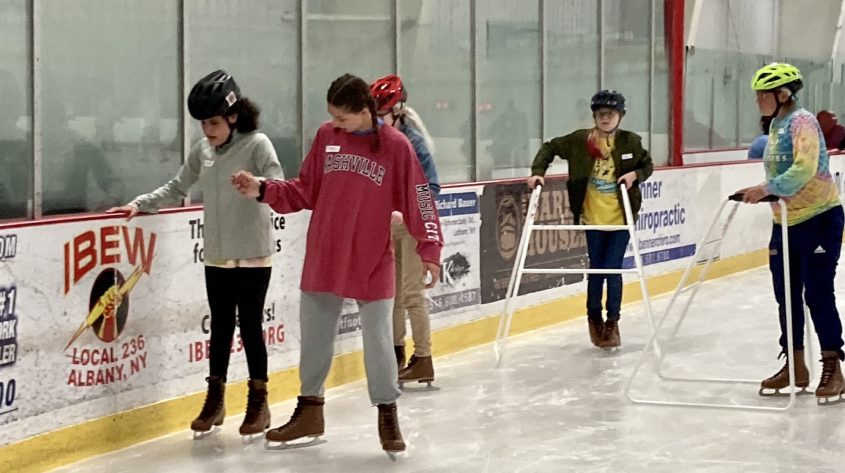 SARATOGA SPRINGS– Camp Abilities is back in person after hosting a virtual sports camp for two years.

Camp Abilities is a summer sports camp for visually impaired children and teens ages 10-16. Camp Abilities is a service project of the Saratoga Springs Lion’s Club that began in 2014. This year, 12 campers are attending the week-long camp at Skidmore College.

“The idea is to focus on their self-esteem and their confidence and that kind of stuff,” said Camp Abilities board member John McDonald. “They spend a week here, and for a lot of kids it’s the first time they’ve been on campus or away from home without their parents.”

“All sports are adaptive sports, to be able to compensate for visual impairment,” McDonald said. “So when they’re playing kickball, the base beeps and the ball beeps. So once the ball is kicked, the outfielders have to follow the beeps to get the ball back. And once that ‘they get it, if they get it before the runner gets to base, that’s an out.

There is no charge for campers to attend, McDonald said. He said grants, donations and fundraising efforts cover the cost of the camp.

The camp was recently recognized by Lions Clubs International and awarded a Kindness Matters Service Award, which recognizes Lions clubs that have created a high-impact service project. McDonald said it was one of five awards given in the United States and one of 30 internationally.

Camp Director Tiffany Suppes has been with the camp since its inception.

“This is our ninth year, and after being virtual for the past two years, it’s really great that the kids can come back and participate in physical activities again,” Suppes said. “Our kids are usually the only ones in their school district who are visually impaired, it’s very isolating.”

The last two years the camp was virtual due to the COVID-19 pandemic. Suppes explained that the camp sent a lot of equipment home to campers and was able to allow those who needed it to use iPads to join Zoom. She said the organized camps practiced practically more individualized activities, like yoga, and fewer team sports.

Some campers have never met another visually impaired classmate before coming to camp, Suppes said. She said being able to make friends and connections is amazing.

“It’s hard to be able to do physical activity sometimes if it’s not adapted appropriately, or if they don’t have access to the right modifications,” Suppes said. “So that’s something we teach them here, that you can do so many different activities and sports.”

The camp also teaches participants how to stand up for themselves, as well as how campers will be able to do these activities at home in their communities, Suppes said. She said it will help them continue to be physically active throughout the year.

“Having a camp like Camp Abilities gives children with visual impairments the opportunity to make friends, to interact, to learn how to grow and defend themselves and to really be able to enjoy sports and activities and build that confidence to go out and do it after camp,” Suppes said.

On Tuesday, campers were bused to the Saratoga Springs Rink to spend the morning ice skating. Some campers relied on walkers or camp counselors for assistance as they skated and others needed no assistance and quickly circled the rink. McDonald explained that when visually impaired people play hockey, they use a larger puck and it has ball bearings, which makes noise when hit on the ice.

“I see all these people and I do all these sports,” said camper Ted Carl, 12. “I’m making new friends who really understand my technology, unlike in school. And also they understand what it is. We had a conversation last night about similar stories and situations we encountered at because of a visual impairment. I love coming here and I really enjoy it.

Fourteen-year-old twin campers Scout and Sabie Dowd said they love coming to camp because there are lots of different activities they find fun and they get to be around different people. Monday was the first time they played kickball. This is their first year at Camp Abilities, they said.

“There are a few first-time activities,” Sabie Dowd said. “And there are people who look like us, so that’s good. We like that.

More from The Daily Gazette: