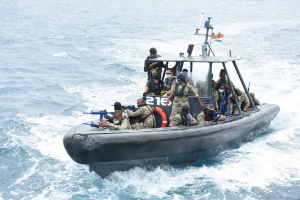 The amendment gives a fifth function to the military and allows it to work alongside the Seychelles police outside of states of emergency. (Nation of Seychelles)

Seychelles’ National Assembly on Wednesday voted on an amendment to the island state’s constitution that gives the Seychelles Defense Forces (SDF) the right to enforce national laws relating to public safety, environmental protection and maritime safety.

Indeed, the amendment gives a fifth function to the army and allows it to work alongside the Seychelles police outside of states of emergency.

During the presentation of the amendment to the Constitution, Vice President Ahmed Afif said that although there were changes to the Defense Law, under the Constitution the SDF had previously only four functions. These functions are to defend the Seychelles – an archipelago in the western Indian Ocean – and its territory; assist the State in fulfilling its international obligations; to help the civil authority in case of emergency and disaster to maintain peace and order if the president asks him to do so, and finally to participate in civil works for national development.

“The question therefore is where in the Constitution does it allow the SDF to assist the police in their duties, as stated in the Defense Act. The amendment follows the recommendations of the Constitutional Review Committee,” said he added.

Discussions on the subject took place throughout the day and ended with all members of the ruling Linyon Demokratik Seselwa (LDS) party voting for the amendment, while party members of opposition United Seychelles (US) voted against.

When the Defense (Amendment) Bill was published in the Official Gazette on May 5, 2022, the Ombudsman, Nichole Tirant-Ghérardi, delivered her opinion on the 10th Amendment to the Constitution of Seychelles.

Tirant-Ghérardi said he had reviewed the provisions of the proposed bill along with the original bill and that the decision to seek to amend the Seychelles Constitution is a violation of the letter and spirit of the supreme law. of the country for a number of reasons.

One of the reasons is that the separation of the civilian police from the role of the military occurred for fundamental reasons which Seychelles considered a cornerstone of the democracy of the Third Republic.

“The specter of members of the defense forces maintaining public order or running any essential service in the country on a permanent or semi-permanent basis does not sit well with this notion of democracy, even if the defense forces can assist civil authorities by providing technical services assistance generally related to minor matters beyond the expertise of the police Any contemporary discussion about changing this balance must consider all aspects, including the effect of such a change in the existing legal framework,” said Ombudsman Tirant-Ghérardi.

She also said the amendment does not address issues of civil liability that may arise from such cooperation.