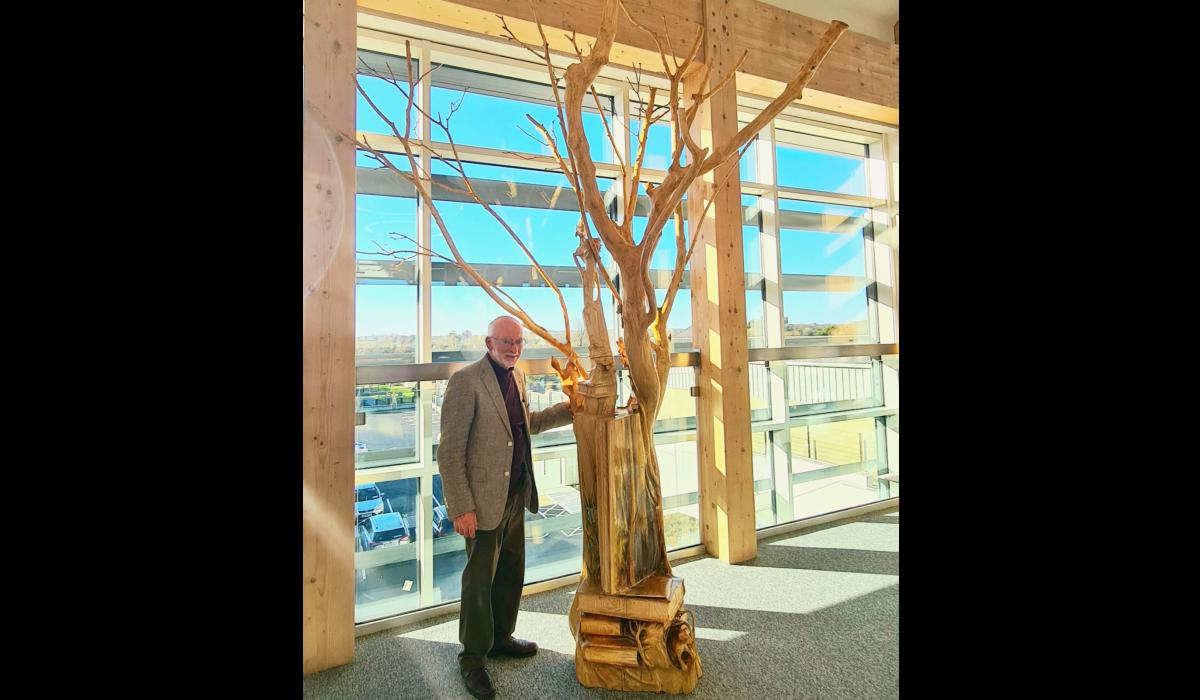 The official opening of the Edgeworthstown Library in recent weeks was a major event for the entire local community as they celebrated the addition of this magnificent modern building on the town’s main street.

But for local artist Kevin Flood, the opening was very special as it not only launched a new public installation, but also showcased his beautiful wooden sculpture called The Tree of Knowledge.

â€œHaving a play locally is an important thing for me because I’ve always been involved in the arts and it’s nice in your area to have a major play that you create over a long period of time,â€ he said. he explained when the chef caught him at the opening.

Kevin is originally from the Legan area and has been involved in the arts his entire life, attending Dun Laoghaire School of Art straight out of high school to pursue a career as a painter.

â€œIt really was around this time that my interest in sculpture started,â€ he remarked.

â€œBecause I started out, probably like all young people at the time, with the intention of pursuing a career as a painter.

â€œI loved sculpture from the moment I was introduced to it – sculpture of any description – but especially stone and wood. These are the two things I loved to sculpt. The first piece, in fact, that I ever sold was a woodcarving when I was just a college student.

It’s come a long way since that first woodcarving and the evidence is there for everyone on the top floor of the new library.
Stretching towards the ceiling, this sculpture combines the beauty of trees and nature with the gift of reading.

There is even a subtle connection to the Edgeworth family in the carvings of this magnificent ash tree.

Perhaps what makes this piece even more special for the artist is the fact that the wood used for its creation has an important connection to Kevin’s own childhood.

â€œSo the ashes finally exploded in a very unusual storm for the season. He was in full leaf at the time, which is probably why he fell. And I hated the idea of â€‹â€‹losing that tree, so what happened next was we kept a big section in order to make a sculpture and that’s that sculpture.

You could spend enough time admiring this piece. The softness of the polished wood draws you to a subtle leaf pattern or a forest creature perched on a branch.

And, explained Kevin, perspective had a huge role to play when he was sculpting this piece. A child, for example, would look at this from a lower point of view and so if you crouch down and look up above you can admire the wonders of the artwork from below.

A small ermine sticking its head out of a burrow, or the sculpted tomes that form the base invite you to run your hands along the grain and appreciate its softness while exploring the wonders that lie at the other end of the next branch.

â€œI wanted to show the beauty of ash. There are a number of things about ash, â€Kevin said of his inspiration.

â€œFirst of all, he is threatened because of the disappearance of the ashes. And it is a particularly beautiful grain. You can see the beauty and the shine of the grain. And it’s a tree that you can take for granted because it’s a native tree and there are so many growing around us. It was something I especially wanted to explore – and the beauty of ash when you polish it.

â€œBut there is something else now about any tree, but particularly ash. Depending on the strength of the wood, the branches will spread out in different ways and the ash is particularly elegant because the branch comes out a little more from the main trunk of the tree, â€he continued, stepping back from the sculpture and looking back. pointing up. where, yes, the branches do indeed become more elegant.

What adds to this element is the fact that there are a few twigs near the top that have been left untouched, creating a particularly striking statement on the ends of these smoother branches.

â€œIf you ever want to look at beauty in terms of balance, you can watch a tree grow at that time of year when the leaves are more or less gone and just study the beauty of how it balances. It’s amazing, â€said Kevin, making a move towards that balance on his own work.

â€œI spend a lot of time looking at trees this way. And the other thing to do is watch how the branches come out of the tree but gradually become thinner and more elegant as they grow. So it’s very progressive and it’s really beautiful and we forget it sometimes. When people learn to draw trees, they don’t pay enough attention to the subtlety with which the branch thins.

â€œThe other thing trees do is react to everyone’s space. A tree will try to grow straight for the most part and put its leaves in sunlight on each branch.

â€œBut he will respect the space of the neighboring tree. So if you ever watch them, they gently pull away from each other as they grow older. And that’s one of the nicest things to see in a wood – to kind of see how they respect each other’s space.

â€œSo these are the key points on the trees that inspire me. “

Near the base of the sculpture are delicate paintings of flowers and elderberries – a tip of the hat, if you will, to the Edgeworth family.

“The Edgeworth family were famous plant collectors and this is one of the plants they brought back to Ireland, the Himalayan poppy or the meconopsis poppy,” he explained, pointing to the little touches. colors painted on one of the carved books.

â€œI felt the pretty vibrant blue brings the thing to life. And because they collected and cultivated it here locally, I thought it would be very appropriate to have it in addition to the elderberry.

â€œI also wanted to have subtle things like these little leaves,â€ he said, pointing to one of those little hidden details, â€œthat you won’t see until you study it for a while.

â€œThey are all cut little by little. It draws you in a little bit and you see these things.

It truly is a stunning piece of art that will invite even those who have little interest in such things to stand up and study it in detail. Shop around, examine every branch and nook, and you might find something wonderful.

â€œI was absolutely delighted to have the opportunity to create this piece. It was important from my point of view.

The Tree of Knowledge is on display on the upper level of the Edgeworthstown Library and is well worth a visit.