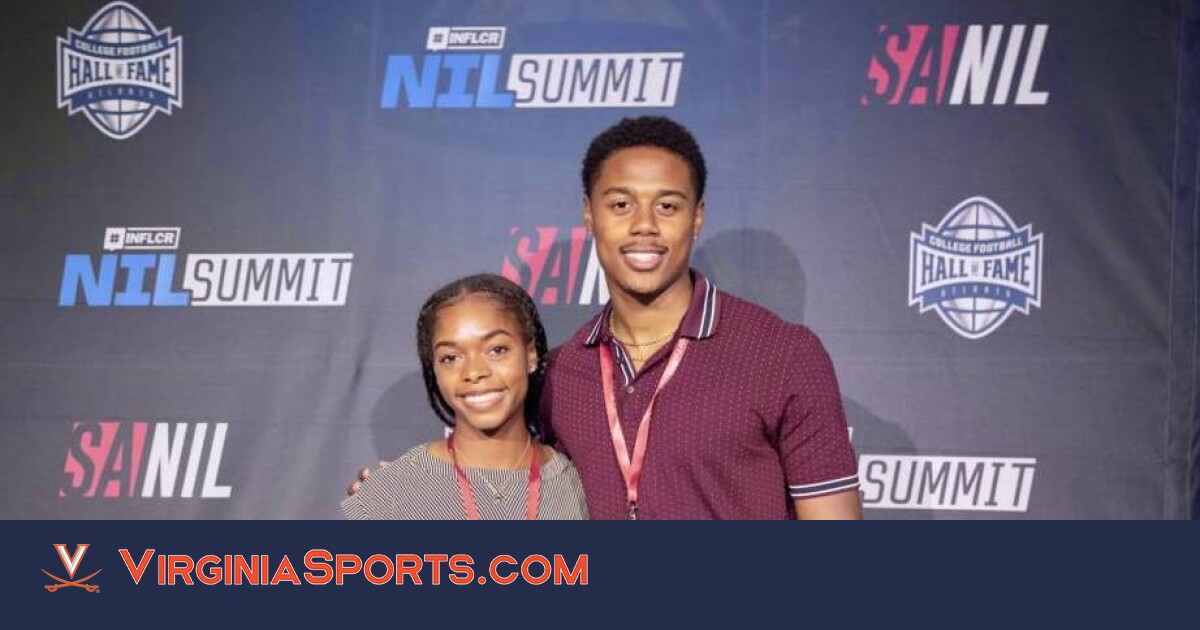 CHARLOTTESVILLE — The landscape of college sports continues to change, and the advent of name, image, and likeness (NIL) opportunities for student-athletes is part of that evolution.

At the University of Virginia, the athletics department has been working with Altius Sports Partners since January to educate student-athletes on NIL options. As part of its relationship with Altius, UVA is adding a full-time general manager who will be on the ground helping student-athletes.

That’s why UVA was among the schools that sent student-athletes to the first INFLCR NIL Summit. Held over three days in June at the College Football Hall of Fame in Atlanta, the event was launched to further educate student-athletes about the possibilities of NIL.

Representing UVA were fourth-year students Alahna Sabbakhan and Nigal Davis, kinesiology majors who are members of the athletics program. They said they were intrigued when they heard about the summit, wanted to know more about NIL and decided to apply.

Davis, who is from Martinsville, is studying entrepreneurship. One of his classes, he said, discussed “creating a platform to help student-athletes become mentors or connect with young athletes. I thought that if I was selected to go to the top, with the knowledge I would gain, I could help my teammates and other athletes when I returned to Charlottesville.

Several hundred student-athletes from across the country attended the summit and they formed a diverse group.

One of them, Sabbakhan said, was a volleyball player “who was interested in DIY and creating online content. It wasn’t limited to people who just go to big schools. All athletes, regardless, could have the opportunity.

The student-athletes spent time together at meals and functions, participated in breakout sessions on a variety of topics and heard from guest speakers including former football stars Tim Tebow and analyst Jerome Bettis. ESPN basketball player LaChina Robinson, Sophie Gage of the NFL Players Association, and executives from NIL-related companies like INFLCR and Student Athlete NIL.

“There were athletes, but a lot of the speakers were either people who were part of companies or people who created their own online presence,” Sabbakhan said. “There were also university student-athlete speakers, so it was a pretty good mix of people from different backgrounds.”

Davis said, “You can choose which sessions you attended and which you sat.”

Thanks to UVA’s initiatives to educate its student-athletes, Davis and Sabbakhan traveled to Atlanta with a solid understanding of NIL.

The summit, Sabbakhan said, discussed how NIL works, but focused more on “how to really use it to get the most out of it.” How to use it to your advantage and the best ways to build your brand. It was a mixture of all that, really.

Davis said he believed “what [summit organizers] really wanted us to focus on building your own brand and authenticity. This is something that Tim Tebow talked about. He doesn’t personally drink soda, so he wasn’t going to sign a brand deal with Coca-Cola. It was a whole lot of education and intelligence about the brands you decide to work with. Choose only brands that are authentic to who you really are.

The summit, Sabbakhan said, “was a very good experience, and not just for NIL, not just for the university. A lot of it was about life lessons and money management, which is obviously very important going forward. Of course, it inspired me a lot to use the [NIL] there are opportunities now and I do a lot of them, but in general I feel like they were really helpful things to help me in my own life.

Davis noted that he also made some valuable connections at the summit, “relationships you make in places like this. I know Alahna has bonded with a whole bunch of different athletes, and so have I. We probably wouldn’t see people from the PAC-12 or the Big Ten or [other conferences ordinarily]so with all of us gathered in this place together, we could connect, talk to them, get different perspectives on how things are going in their schools, how things are going with NIL for them.

Additionally, Davis said, Atlanta student-athletes connected “with small businesses that had multiple different brands. We were able to chat with them and see what the brands wanted to do with us in the future. Networking is huge in all aspects, and [at the summit] it was definitely a good thing.

Not only did Davis and Sabbakhan learn more about NIL in Atlanta, but they befriended student-athletes who played sports they weren’t always familiar with. Davis met a few water polo players from a school in New York, and Sabbakhan met several gymnasts.

“Without this opportunity,” said Sabbakhan, who like Davis chose to work with the Cavalier Futures collective, “I probably wouldn’t have been able to meet so many gymnasts, and it’s funny, now I’m following them. on Instagram and stuff. You’re used to seeing the track all the time, so it’s really nice to have been able to make those connections and see different things.

A new school year is about to begin at UVA, and Sabbakhan and Davis look forward to sharing information about the NIL Summit with other student-athletes.

Through the Athletics Department’s partnership with Altius, Booz said, “We can do exactly those kinds of things: take all the different experiences that our student-athletes have, learn from them, and figure out how we can best position ourselves. to UVA to maximize that. opportunity. We are therefore going to have them talk about their experience, what they have learned, what they would like to see in the future, how they think we can better help them, in the short term and in the long term, to benefit of their name, image and likeness.

In May, UVA Athletics and The Brandr Group established a licensing agreement that allows student-athletes from Virginia’s 27 varsity teams to use the school’s official branding and logos to enjoy NIL. Late last month, the Athletics Department announced that custom fan jerseys, personalized with the names and surnames of participating Cavalier student-athletes or with the fan’s name and number combination, are available through the Bookstore. UVA.

“We talked about education and helping student-athletes learn to do these things and take advantage of the opportunities they have, which is really important,” Booz said, “but we also want to be very active. to help our student-athletes facilitate opportunities for them to enjoy while they are here. They are here for a short period of time, and we want to help them maximize that.

To receive Jeff White’s articles by email, click the appropriate box in this link register.